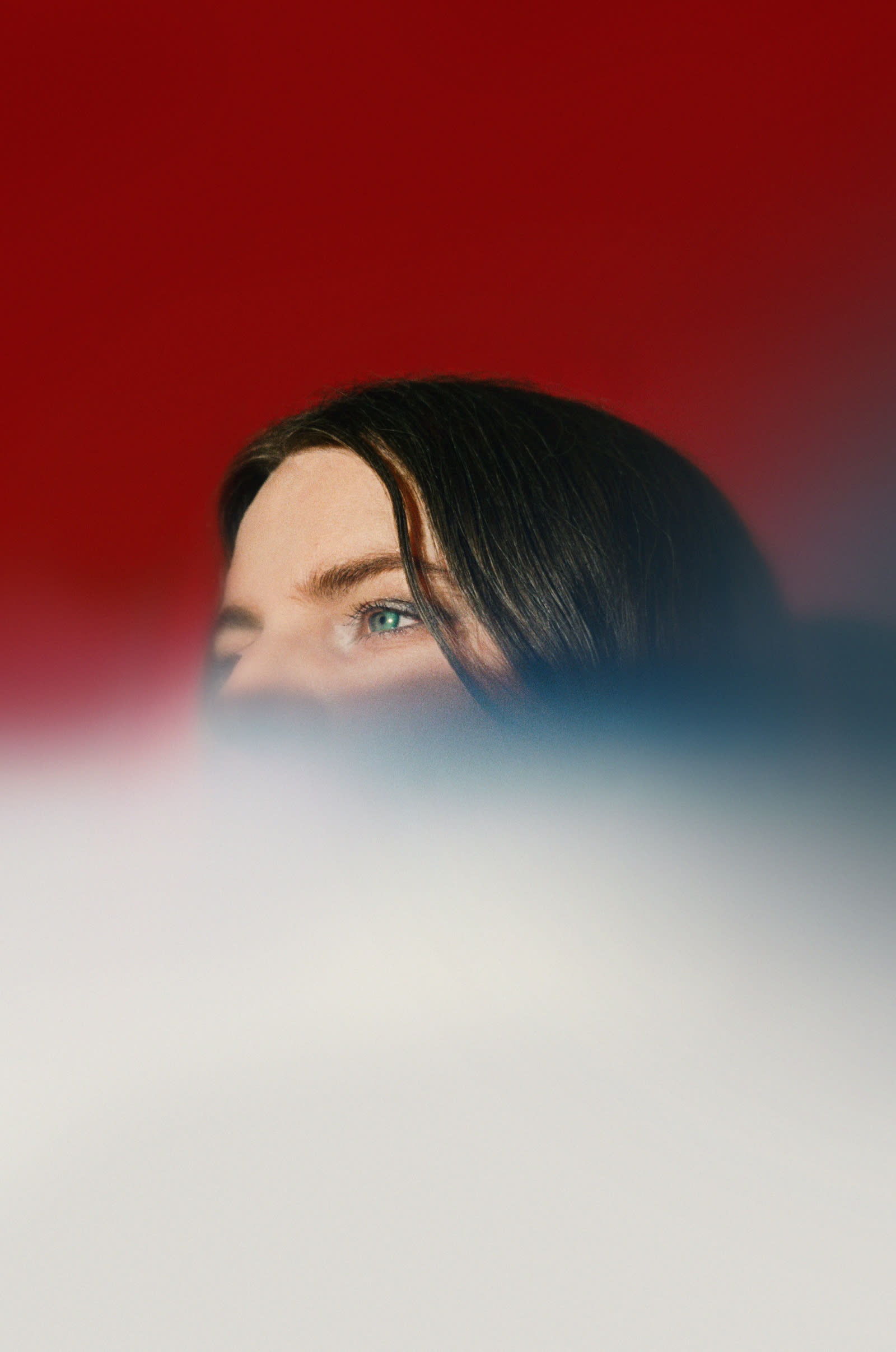 Ziúr: 'There are so many possible directions for your music. Why would you go for the same one that everyone is choosing?'

Ziúr counts her computer as her primary bandmate, but she’s collaborated constantly throughout her career, including recently on performance projects with artist Juliana Huxtable and dancer Kiani del Valle. She also co-founded the now-defunct Boo Hoo, a party series famous for its diverse lineups and inclusive atmosphere.

Since Ziúr's first show on Refuge last September with SWAK, she's become a close friend of the station and was instrumental in organising the Nyege Nyege takeover last November. We’re only two episodes in, but her new residency Now Now is already one of the station’s least predictable.

We caught up with Ziúr to talk about her radio show, upcoming projects and perspectives on the scene.

‘Now Now’, your new Refuge residency, shares its name with an EP you released towards the end of last year, which I understand you produced in only one day. What made you want to set yourself that challenge, and how was the experience?

Yes, the Now Now EP took 27 hours in total, including sleep. I just wanted to see if I could do it really. It was boredom–one of those days stuck at home in lockdown. The first day was pretty good and I managed to finish three tracks. Then on the second day, I really hated myself for it, but I got there in the end.

How do you think working under time pressure affects the music you make?

I always tend to work quite quickly. I like it because it prevents me from overthinking. The best music I have released was all written in a very short amount of time.

I’m not someone who has hundreds of versions of the same track. I think there are people who work like that and never manage to finish anything. I prefer to finish something quickly before I get lost in a downward spiral of over-editing without necessarily making anything better. I’d always rather work on a fresh idea. If I’m overthinking, it compromises the music’s freedom.

What made you decide to start a radio show?

I've done a lot of mixes for the big platforms over the years, and it feels a bit like nobody listens to them anymore anyway. I don't know if people aren't listening to mixes in general, or just not my mixes. Maybe they're just over me haha!

My focus has changed. I’m trying to be involved in and support something rather than just boost my own exposure. I feel like on Refuge I can contribute and maybe bring some interesting guests on as well. It feels good to be involved in a new project at a relatively early stage.

The last time I saw you at the Refuge studio actually, I noticed you weren’t using any headphones, is that an artistic choice?

Yes, I used to mix with headphones but not anymore, it's a distraction for me. I feel I can do more interesting things with the time I would be using to pre-listen or beat-match. It's an artistic choice, but also practical, I'm a bit lazy I guess!

Before you started making electronic music you were singing and playing in punk and hardcore bands. What drew you to that scene initially?

To be honest, growing up in a small town, the punk and hardcore scene was the only outlet for any musical alternative. Back then it wasn't that easy to write music on a computer. You had to have samplers and a load of equipment. It wasn't nearly as accessible as it is now.

At what point did you start making electronic music as a solo artist?

Each time I started playing in a new band it naturally ended after a few projects. There was always a two-year time span in which I could work well with people, then I would start wanting more. After a while, I started using my computer. It was easier for me to work alone–not as much logistical effort or need to rely on others.

My interest in electronic music grew slowly. Initially, I was just interested in finding different ways to make the computer my bandmate. What came out was by necessity more beat-driven, then it got more interesting as I improved technically.

Was there a point when you were making dance music in a traditional sense? Emulating the sounds of specific genres like techno/house etc.?

No, I would always try and stand on my own, which automatically makes things a bit weird. There are so many possible directions for your music. Why would you go for the same one that everyone is choosing? That approach just bores me.

You have a history of organising parties too, most famously the night Boo Hoo. Do you have any plans to start running events again?

I would love to but have nothing concrete planned at the moment. Myself, Juliana Huxtable and Theresa Baumgartner started doing these Off License events, a performance we worked on together and took to Unsound, Krakow and Lisbon recently. But in terms of a straight-up club night, I have no plans right now.

You’ve spoken in the past about the importance of making your parties 'asshole-free zones'. Right now it seems that more and more club nights are aiming to create safer spaces for their crowd. What do you think are the important ingredients you need to put into place to provide that?

The question is, are safer spaces really being created? I think a lot of people are using the ‘safer space’ idea because they want to do something that fits a current trend, or merely to present themselves as being 'woke' without feeling the real need to incorporate these things into everyday practice. I don’t know if these declarations always mean you’re going to actually find a nice environment when you go to events.

I think the main ingredient is: mean what you say. With Boo Hoo we didn’t openly want to promote any specific agenda. It was all about the details: how you curate a lineup, the kind of space you choose, how you take care of it, how you brief security etc.

I think people need to prioritise how they handle things on the down-low. The truth is, what goes on behind the scenes is more important than how you promote your ideals in the front. That's often what makes the difference.

You have to ask yourself how many people are actually speaking the specific language of ‘safer space’ as well, right? If you want to be genuinely more inclusive, you also need to slow down with some of the buzzwords. Speak to people beyond your scene and your crowd, try and broaden your horizons a little bit.

I understand that you also resisted having specific labels put on your night, right? It wasn’t specifically sold as a queer night?

Yes exactly. That's not what I wanted for the night. I understand that those spaces need to exist, but I didn't necessarily feel the need to create one with Boo Hoo.

I also get frustrated myself when I'm exclusively booked at queer events, just for an identity I may have. I’m slowly getting frustrated by this kind of queer politics. I’m frustrated by acts of politicised kindness that seem to be aimed at making people look good, but aren’t necessarily performed because people feel any real necessity. It takes away the meaningfulness of the action for me. It feels like we probably have to do the fight over and over again. Like, when was the last time you saw a pride flag that wasn't a corporate logo?

Is your goal more intersectional?

Definitely, that’s really important to me, even though I wouldn't necessarily promote it as such. Intersectionality is a buzzword too of course!

Let’s talk about your recent musical collaborations. At your Atonal show last year you worked with a dancer, Kiani del Valle. How did that come together and what was your experience working with dance?

I’ve been working for a while with Kiani and Sander Houtkruijer, a videographer. We’re all friends–we hang out together and connect on an artistic level. The three of us were working on a music video for my album Antifate which was sadly never finished, and right now we are working on Kiani’s dance film for her ensemble. Collaborations happen when it feels natural–I primarily work with people that I know and have a level of mutual appreciation with.

At Atonal, it was a very spontaneous decision to add Kiani and Sander to the lineup. The performance itself was very improvisational. The set was loosely structured, and some things didn’t work out–for example, Kiani broke a camera attached to her arm by jumping off the stage. It was impossible to stick to the plan, but in the end, our energy just exploded and reached levels we didn’t expect.

Another recent collaborative project of yours that might have flown under some radars is your work with the Rắn Cạp Đuôi, a collective from Ho Chi Minh City, Vietnam. Tell us how that came about?

That was an amazing project to work on. The band had recorded the album and were just looking for a label. They wrote to James Ginzburg from Subtext, who was really excited about it but felt it wasn't ready, so he asked me to be involved.

What was your role exactly - I’m curious to know how far the finished album departs from the original recordings.

It’s all very much their vision. I didn't want to be some kind of coloniser and rewrite their music. My role was to create space between the different elements–because each track has a structure of three sections. I dissected it and added percussion parts here and there, just to subtly make things more audible and smooth the transitions.

I really liked the result, I love that their music combines these traditional elements with an experimental structure. I was happy to see that it got some attention too. The album was in the NY Times, and they became the first Vietnamese band to be covered by Pitchfork, which is amazing–although kind of tragic that it’s never happened before.

Rắn Cạp Đuôi are doing a mix for the next Now Now show in April too, which I’m really excited about.

What’s coming up next?

I'm finishing a new album at the moment. It's hopefully coming out later this year. I’ve been working with three different vocalists on it, combining three completely different worlds. I'm acting as 'the glue', pulling it all together. It’s exciting but too early to say much more about it. I started telling people it's a jazz album. I mean it's not really, but I guess it's my kind of jazz.

What's keeping you inspired to make music at the moment?

Coming out of a dark second covid winter, seeing sunlight again is definitely helping. Being close to finishing a body of work is really motivating as well. Plus, touring starts again soon and I have to prepare different live shows for some festivals in April. I'm happy to see life slowly coming back.

You can listen to the latest episode of Ziúr's Now Now residency here.