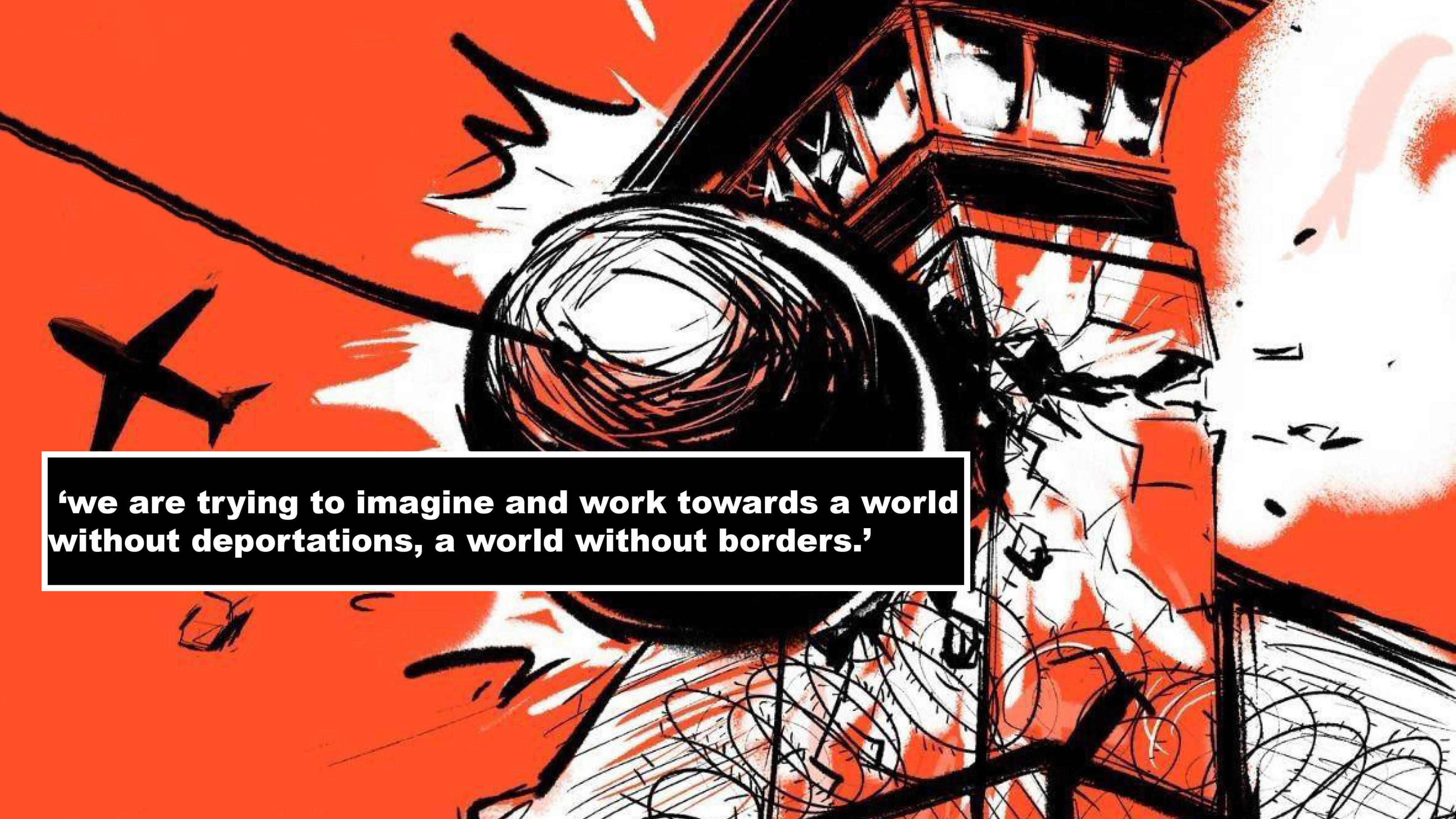 BER's New Deportation Centre: what does it mean and how can we stop it?

A new detention centre is scheduled to open at the Berlin airport by 2025.

The new Berlin airport has long been the subject of intense controversy: from the jaw-dropping cost and extensive construction delays to the public outcry against the closure of Tegel airport.

However, government proposals to create a new "asylum processing centre" on-site have put the spotlight on the even more sinister topic of detention and deportation. The planned facility at BER airport, which should be built and ready to open by 2025, could make the process of deportation from Germany (already a regular occurrence) simpler, faster and more efficient.

Established at the end of last year, the Stop the Deportation Center BER campaign is part of a growing chorus of groups in Berlin who oppose the state’s restrictive and racist immigration policy. We sat down with M. from the campaign to hear the latest developments and find out how the community can get involved.

Thanks so much for taking the time to talk with us. For those who haven’t heard about the campaign, can you give us a quick overview of it and why your group launched it?

We’re a group of people, some from organising backgrounds and some who are just interested in the campaign, and we’ve been meeting regularly for about a year now to mobilise against the deportation centre through various actions, demos, rallies, and lots of research about the complex—the planning, the building, and what exactly it will entail.

The planning of the new deportation centre has been a really intransparent, undemocratic and corrupt political process within the Brandenburg government. It all happened behind closed doors and has involved a corrupt investor [Jürgen B. Harder who, according to the campaign's website, "will make millions of euros in profit from the deportation centre over the next 30 years."] Initially, it was really hard to get any information.

When we talk about deportations, we are talking about people, often vulnerable, often racialised people, being taken by force onto flights by security guards or cops, sometimes in handcuffs, and being flown against their will to a country that they previously left behind. Deportations are scary and dangerous. Cops or security are always present, which can lead to physical violence. There have been cases of people being injured, falling extremely ill due to stress and even dying on deportation flights. Of course, deportation can also lead to death in the country people are forced to return to, because they are not safe nor are their needs met there.

Before we jump into the details about the new centre, how would you describe the current state of immigration policy in Berlin and Brandenburg?

I’m not an immigration policy expert, but it is pretty awful. There are many aspects that different groups and refugee-led groups are organising against.

For example, something as simple as the right to work and study: it’s very, very hard to get access to that. The government grants people—if anything—ungenerous social benefits, makes them completely dependent on the state and then never actually offers them the right to work, study or live. Many people are living in constant fear of deportation. And to be specific about deportation because I think it can be an abstract idea for many people: living in fear of deportation is extremely traumatising. You may or may not be notified, you can be taken from your family, home or community at any time. The state will demand deportation and if you don't comply, then the police can get involved, which is a completely terrifying ordeal.

Something else that refugees and migrants are calling for is the abolition of Duldung, which is a ‘tolerated’ status that allows people to stay for an indefinite time. But you basically can't work or study or make a life here. As soon as it's deemed safe for you to return to the country you travelled from, the government can deport you. This creates a constant state of suffering and fear.

Why are people being deported? Who is being targeted for deportation most often?

In Germany, anyone whose residency status can be questioned and anyone whose asylum application is denied can be deported. Obviously, it's very rare that people from, for example, the UK, Australia, or the US, are deported. It's mostly refugees and migrants from the Global South and Eastern Europe. Black and POC refugees and migrants face a specific kind of violence.

It can be an arbitrary decision. Some people are deported after they have lived here for many years. They have communities, families and livelihoods. Some are deported as soon as they arrive at the border–that figure isn’t even included in the overall deportation figures.

What are the specific implications of the BER deportation centre? How will it change the current situation and who could be most affected?

It’s going to be easier for authorities to deport as many people as possible. It's really scary for anyone whose residency status is in question or can be questioned, who lives in Brandenburg or Berlin. There are so many people who live in constant fear of being taken into deportation detention, and this will just fuel that even more.

The fact that this building is right next to the airport, where the deportations take place, and that there will be space to detain so many more people is a very gruesome and significant change.

What are the authorities currently saying about the plans for the buildings at BER? And how have they responded to the demands of your campaign?

Well, they don't say much. We don't manage to have much of an exchange with them. We now know roughly what the site of the deportation center will look like. There will be a legal facility to simplify the legal procedures around deportation. Everything authorities need to deport people as efficiently as possible will be on site. They are naming it an Ein- und ausreisezentrum, meaning ‘arrival and departure center’, which we think is completely intransparent and dishonest.

The Greens have been a target of some of our actions because they have previously said they won't be part of a coalition that builds a deportation centre. They are now part of that coalition and doing nothing to stop it. They claim to be a liberal and pro-refugee party but now they are proving the opposite. The SPD has said less about immigration policy, but they seem to be a little more self-aware about the fact that the process has been corrupt. The youth groups of both parties have been ashamed that their elders are taking part in this and they’ve called for a stop to the plans. The pressure from them alone, though, just won’t be enough.

The Greens have definitely heard us and have definitely been disturbed by us, even though they haven’t done anything to act on it. SPD, I think, are also starting to hear us—and not just us. We called for a few action weeks, and there have been so many groups and also individuals who have gotten involved. That has been really, really cool. The movement has grown a lot in the last few weeks.

You’ve been organising for about a year now. Have you seen the attitude and the actions of the government towards migration change since the war in Ukraine started?

I would say that since the invasion of Ukraine, there have been some reforms by the German government to help Ukrainian nationals receive a relatively stable residency. They have the right to work and study and have been pretty much provided for, which is fantastic. There are many Black and POC migrants who lived in Ukraine and fled the war to Germany who have a completely different story. There has been a mostly grassroots response to those cases where people were provided with absolutely nothing. There are campaigns for reforms that will grant them the same benefits as Ukrainian nationals, but it remains a pretty bad situation.

Other countries in Europe have sometimes looked towards Germany, for better or worse, to inform their own immigration policies. How could building and using the BER deportation centre influence free movement and immigration policy across the EU?

Any current policy and any new policies, any new institutions, that make border politics more elaborate and strengthen ‘Fortress Europe’ can be very easily emulated by other EU countries. We’re worried this model could be the future of a fascist and racist ‘Fortress Europe’ not just in Germany, but also in other EU coloniser nations. If authorities like what this does and find it effective, then they will copy it. And I think that's really, really terrifying. It's a process that we definitely need to stop before it can start.

Many of us are also just appalled that this is happening in a place like Berlin, a place with a special and exciting history of refugee and migrant resistance. It's really just like a slap in the face. The fact that the deportation centre is being built in Berlin adds a layer of fear. If this can happen in Berlin, then it can happen anywhere.

Finally, how can readers get involved? How would you like people to support your work?

Spread the word. Keep an eye on our Instagram, Twitter and website to find out about upcoming actions that we’ll need support on. Keep an eye out for demos. Tell your friends, tell your neighbours! This information just needs to be spread. So many people don't know that a deportation centre is being planned, because that’s been the nature of its planning: opaque.

We also have flyers on our website that you can print out and share at your workplace, put in your neighbours' post boxes, plaster up in the neighbourhood, or bring to a party or event box office. Please spread the information and stay tuned.

The only way to stop the deportation centre is by growing the campaign and the movement as far as we can, including beyond Berlin and beyond Brandenburg. This is a German and European issue.

We recognise that the countries of ‘Fortress Europe’ are currently and historically responsible for instilling war, poverty, climate disaster, racism and anti-Blackness, queerphobic and sexist violence, in lands across the world. The legacy of European imperialism leads to people wanting or needing to move to Europe. Whether it's safety, family, healthcare, education, or economic reasons, we believe all reasons are legitimate and that movement is life. In our campaign, we are trying to imagine and work towards a world without deportations, a world without borders.