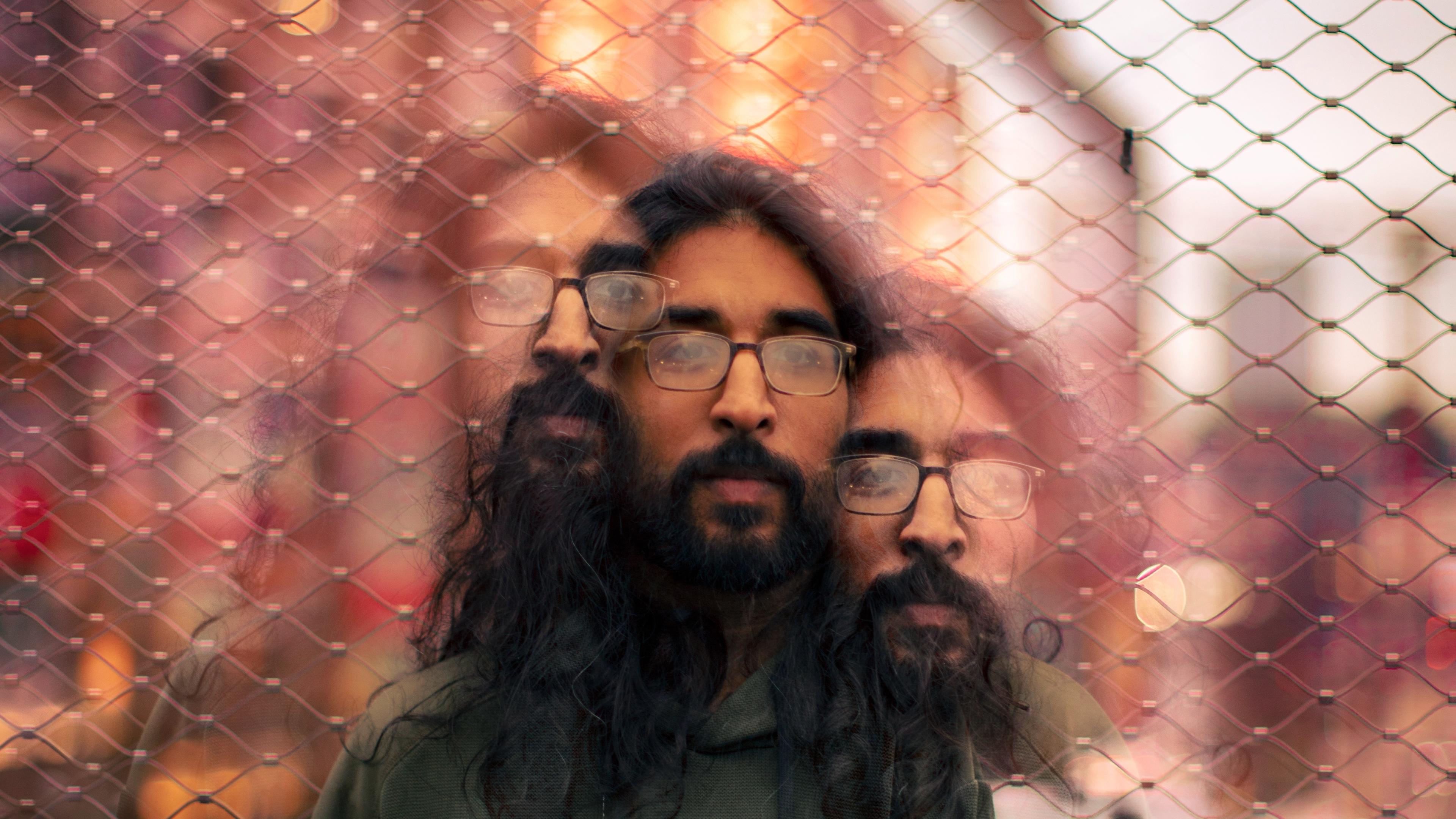 To inaugurate a new series of interviews with our residents, we spoke to Nikki Nair. Broadcasting on Refuge Worldwide since February 2021, Nikki routinely turns in some of the station’s most creative club mixes.

Nikki has quickly developed a unique voice as a producer and DJ by interpolating breaks, hip-hop, bass music, IDM and a range of other influences, to create colourful and twisted dancefloor hybrids. Formerly based in Knoxville, Tennessee, Nikki moved to Atlanta during the pandemic, and for the last two years he’s been releasing music at a breathless pace for labels like Pretty Weird, Scuffed, Lobster Theremin and Dirtybird.

Hey Nikki, where are you and what have you been up to?

Hey! I woke up pretty recently, put on some coffee, now I’m in my studio at home in Atlanta. After this I’ll start making tracks – in December I finally left my day job so this is the new daily routine!

I also just started my own label, n goes to infinity. The idea is to release music that sits between the underground club music that I’ve been making, and other American-style bass music. It’s going to be a bit more flamboyant than my usual releases, and for at least the first year it’s going to be only self-releases and collaborations. The first release, step 2, is out on February 11th.

You were one of the earliest Refuge Worldwide residents. Tell us a bit about your show, has there been a specific idea or approach behind it?

There’s not really a specific idea, but I usually try to fit tracks together that shouldn’t fit together, or that wouldn’t be listened to by the same group of people. Because there’s no dancefloor it’s easier to make mixes that are not as high energy, and I just like to see what I can fit together. I still play mostly dance music – I don’t know how to do ambient music or anything – but I guess this show is me trying to be experimental.

The way you produce and play music shows a pretty broad knowledge of many different scenes. Where does that approach and understanding come from?

Honestly, I think it’s just part of the way I like to consume music. Back in Knoxville, my DJing initially wasn’t varied at all. My focus was on American midwest techno and old-school house music, usually from Detroit or Chicago. When I first started getting attention for my music, it was during the period in which I had finally stopped trying to make purist American techno. I love that music, but I’m just really bad at making it, and I grew up listening to genres like drum & bass, which has really influenced my productions.

After that breakthrough, my goal became to see how many different genres I could try out. I like all kinds of music, and I want to find ways to blend them. I want to find out, can I put EDM in a techno mix? If I like the music I feel like I have to play it.

Most of your releases have been dancefloor oriented, or at least formatted as DJ-friendly 12”s, even though the music itself has moved beyond that. Your ‘More Is Different’ EP for example, had a strong West Coast beat scene influence. Do you feel yourself slowly moving away from strictly dancefloor releases?

I think I’m going to continue to make both. I’m still definitely going to make straight-up dance music, because I know I’ll play it. It’s functional and I want to make people dance.

But I also just get inspired by whatever I’m listening to, and I recently realised that I’ve been ignoring American West Coast-style bass music. In particular artists like Chee and Jon Casey (who are actually both South African, but fit into that scene), as well as artists like Ivy Lab from the UK. All their production is insane, the sound design, just the way that they deal with audio – it's really inspiring to me and I just wanted to try it. I feel like life is short, so I should just try as many things as possible.

Yeah, I have. I have a drum kit here in the studio, I like to make my own samples and loops. I played live bass on a song recently as well. You don’t have to do live recordings to make good music, but I really enjoy making all the parts myself sometimes, I just think it's fun.

I noticed from the early stuff you were making that there’s something specific about the drums–a kind of looseness or flexibility that can sometimes be difficult to achieve on a DAW (digital audio workstation). Is that something you aim for?

I think part of it is because I played drums most of my life. Even when I’m programming in a DAW–and I do program with the mouse a lot – I go for very specific patterns, and I know exactly what I want to write while I’m writing it. Live recording can be great if you want to get percussion really loose, but generally it’s just about being meticulous and having a lot of patience and precision when writing drum parts. 2000s-era drum & bass artists like Noisia are a big inspiration, because when you listen to their drum programming it's so specific. Every hit is exactly where it needs to be.

It's interesting that when you work digitally, it takes a hyper precise, meticulous approach to make something that sounds casually thrown together.

Yes exactly it’s ironic, but it’s so true once computers are involved. If you are casually throwing stuff together on a DAW you’re going to get a very static loop, which on the other hand is very hard to achieve with actual drums. It's all backwards.

How involved are you with the scene in your new hometown, Atlanta, and do you have any plans to run parties there as you did in Knoxville?

I'm not that involved at the moment, I just moved here during the pandemic from Knoxville. While I was in Tennessee we booked Atlanta artists like Helix and Stefan Ringer to play – who are both big influences to me – and I had come to Atlanta a few times to DJ so I already had some connections and friends. Early in the pandemic, nothing happened obviously, and since it’s been possible I have mostly been playing out of town.

I would love to throw a party here. I feel like I would want to do something different, not just a heads-y underground party because that already exists here. Maybe something in the theme of the mixes I’m doing for Refuge – I'd like to put big bass music acts or an EDM artist on the same bill as someone really underground, and design the running order in a way so that people hear both.

Music can be so cliquey, and a lot of that is cultural. But I also think it's slowly changing, and I’d really like to mix things together a bit. A lot of ‘the scene’ is now based around the internet, and when you talk to people individually, a lot of people are listening to a much broader spectrum of music than the narrowly-defined scene in which they participate. I’d like to imagine parties that are more multi-faceted.

I get a sense that there are a lot of people trying to break out of these cliques, or move away from this kind of purist approach to genre, and it’s refreshing.

I think we need that right now. There was a period of extreme sub-genrefication. There’s so many sub-genres, and it's ridiculous sometimes, they don’t all need to exist. It's all dance music.

I used to be one of those purist people. I went through a phase where the way I thought about music was: ‘if it isn’t from Detroit or Chicago, it's bullshit.’ There are some good parts about that way of thinking, you do discover a lot of things that way. There has to be a respect for the history of the music you’re playing, but not in a way that means you’re being bound by it. In general, you find that the groundbreaking artists are the ones who are able to find that balance.

You have talked in other interviews about the importance of meeting Mike Banks from UR (Underground Resistance) in Detroit, in shaping the way you think about the connection between music, history and politics. Do you see any echoes of the UR approach or attitude in things that are happening today?

I feel there definitely are. My experience has been that a lot of people who are serious about dance music realise that there is a political philosophy behind the music, and they want the music they love to continue to represent those ideals.

I don’t know if it's as explicitly political, but there are also a lot of groups that are very community oriented – always focusing on bringing up younger artists and trying to stay true to their ideals. I think Juke Bounce Werk is a pretty good example of a group of artists who have that mindset. How they act as people, what they do and how they live within the dance music world is very community-focused and carefully thought out. They think about what everything they do means.

I read that your parties in Knoxville were also community-focused somehow, right?

Well… they were free! It was a small DIY party, focusing mainly on techno, but playing the full spectrum of American dance music. On the one hand, it was a community-based project because everyone could get in regardless of means – so if I was really trying to hype myself up, I could say that! But on the other hand, it was because we thought at the time that if we made people in Tennessee pay to listen to the music we were playing, no one would come. It’s just how we got people to come and dance.

I don’t know if I do have any explicitly in my own music. I wish that I had more Indian stuff in my music – I made a Bollywood edit once, but that was very obvious. If it’s anything, it's something more subtle, just related to the whole soup of music I listened to growing up.

But with the internet, there are all these crazy subgenres emerging in different places. One of my favourite labels in the world right now is SVBKVLT, from Shanghai. I think I put one of their tracks in most of my mixes. It just feels like their music carries a different set of preconceptions about music from those that I have, and it’s totally overwhelming in a club, amazing to hear on a big sound system.