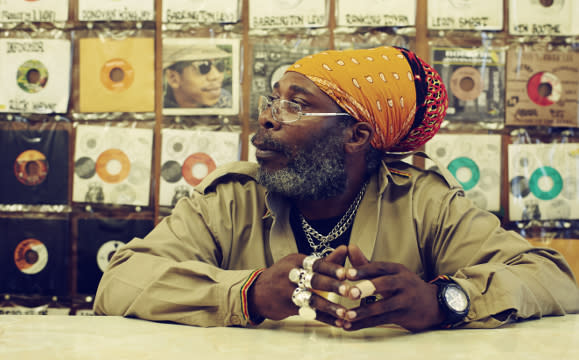 Following three decades of working with the creme de la creme of the reggae world, Winston Williams aka Horseman stepped into the spotlight in November 2014 with his Prince Fatty produced album 'Dawn Of The Dread’ for Mr Bongo.

As fearsome a drummer as he is an MC, Horseman has worked with musicians and producers Tippa Irie, Max Romeo, Gregory Isaacs, Sugar Minott, Jah Shaka, Mad Professor, Barrington Levy, Eeka Mouse and The Royal Philharmonic Orchestra with John Holt – to name but a few – most recently performing with Hollie Cook and Prince Fatty.

Music is in Horseman’s blood and comes from a musical lineage. His father had a soundsystem and his mother Eureka Icelyn Barnes, aka “Miss Girlie”, was a singer who recorded with Laurel Aitkins and Palmer Dice back in the late 50’s early 60’s. Her records are collectable today.

A big personality maybe, but there's not an ego to match, Horseman's ethos is one to spread love. "If my music brings joy into someone's life then that's my aim, its there to make people happy. I'm not in competition with anyone, music shouldn't be competitive, I'm just me doing my thing".