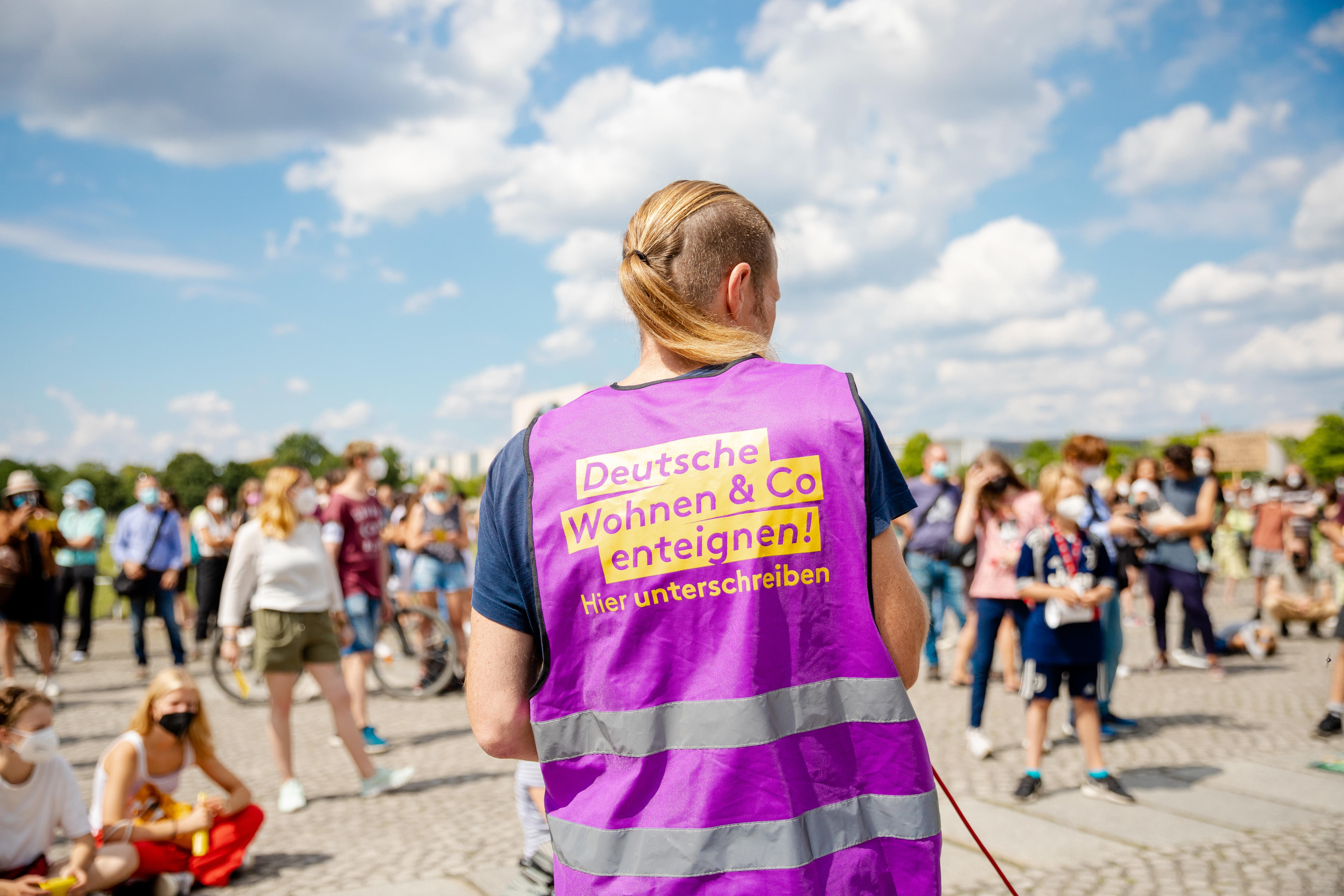 Berlin voted to socialize housing. But what happens next?

Despite a historic referendum, Berlin's new government is delaying the expropriation of mega-landlords.

The biggest celebration on German election night, 26 September, may not have been at the headquarters of any of the victorious political parties.

The activists from the Deutsche Wohnen & co. enteignen campaign, in their trademark purple and yellow outfits, had good reason to be cheerful. For the last few years, volunteers have swarmed the streets of Berlin, collecting enough signatures to force a referendum on whether to expropriate the housing stock of the city's largest real estate companies - Deutsche Wohnen, Vonovia and Akelius, to name a few - and use the properties for a common, social purpose. On election night, Berliners responded with a resounding “yes”. The proposal passed with 57.6 percent of voters in favor and only 39.8 percent voting against.

However, Berlin's new center-left government, led by mayor Franziska Giffey, has decided to put the matter in the hands of an expert commission. Giffey's Social Democratic Party remains against expropriation and since the referendum results were non-binding the politicians have plenty of chances to stall or even sidestep the will of the voters.

The campaigners don’t plan to spend 2022 waiting. We talked to Anisia Petcu and Trevor Silverstein, two activists from the campaign's Right to the City for All working group, about their referendum success and the political uncertainty that has followed. Along with the goal of socializing housing, their group is focused on amplifying the voices of non-citizen Berliners, the large group of the city's inhabitants without a direct say in its political processes.

The new Berlin government is dealing with its internal disagreement over the issue of expropriation by giving an expert commission one year to figure out a plan. How do people within the DW & Co Enteignen camp feel about this compromise?

Anisia: We’re unhappy with this decision because it’s in clear violation of the spirit of the referendum. The expert commision is being framed as a commission that needs to establish “if” the referendum can be implemented, but it’s already been confirmed that such a law would be constitutional. And this commission will need until 2023 to come to these conclusions, which is to say that doesn’t necessarily mean they will even implement the referendum results. This would be a major rejection of the voices of a clear majority of Berliners. After all, more people voted in support of the referendum than for any of the parties in the ruling coalition. So the question should be not “if”, but “how”.

Plus, there are questions to be asked about the validity of this commission. Who will sit on it? How can we ensure that the groups affected by this decision, i.e. the renters, will be properly represented? What guarantee do we have that this commission will not disproportionally represent those whose interests oppose the referendum? These are all crucial aspects in this discussion and given the attitude of some of the coalition parties to the question of expropriation, we have reason to be concerned.

In only three years, the initiative was able to bring this issue from the idea stage to an election victory, forcing the Berlin government to engage with the proposal. Why do you think this campaign was able to succeed?

Trevor: There are numerous factors that led to the success of the referendum. Some were related to our own organizing or campaigning efforts and others were surely external, such as this city’s deepening housing crisis and the cancellation of the Mietendeckel (“Rent Cap”) in April 2021. Our initiative has its roots in tenant struggles that have been going on in the city for many years. The proposal to expropriate mega-landlords served as a unifying banner across many of these struggles and brought a great number of the city’s renters together.

In addition to this kind of connection-building, the campaign was successful in adapting and experimenting throughout the signature collection process, as well as the election campaigning. Our Kiezteam structures were essential to this. We were able to engage with potential voters in every district of the city and also continually grow our resources by involving new activists. This gave the campaign an atmosphere where people with different backgrounds and experiences could get involved. And in 2021, the initiative went from needing 170 thousand valid signatures (about 7% of the city's eligible voting population) to collecting over 350 thousand. And in September, over 1 million people voted in favor of socialization. This growth of support in less than a year, a large chunk of this under a COVID lockdown, speaks to the success of connecting renters of the city and continually experimenting.

You caught people's attention with unconventional promotional tactics such as cheerleading demonstrations at nightclubs. Can you tell us more about this aspect of the campaign?

Anisia: I think this was an important aspect of the campaign both for its external supporters, but also for its members. There are many people in the campaign who have experience with activism in other social movements all over the globe. They drew from their practices and spearheaded this process of using a kind of activism that also brings joy, that is about creativity and freedom of expression, and that allows for experimentation and diversity - of origin, of sexuality, of gender expression, of approaches. In a city that doesn’t want to allow full voting rights for its residents who do not have German passports, this was an important aspect. For us internally, it also meant that we could do our work while also celebrating together, and it created a positive and hopeful atmosphere for the campaign. Through it, we drew the attention of people who might not feel so called upon by “traditional” activism and politics, and encouraged them to support us or even get involved. And I’m happy to say Berlin may see more joy from our cheerleaders in the new year!

You were active in the Right to the City for All working group within the campaign, like so many other non-native Berliners who wanted to become involved. Does the working group have any future plans to campaign further for the rights of non-citizens?

Trevor: The short answer is yes! Right to the City for All is a young organization, in the sense that it was only formed as a working group of the campaign in December 2020. One of our goals was to scandalize the fact that all signatures collected from people who weren’t German citizens would be deemed invalid. When the official signature count reached quorum, there were nearly 55 thousand signatures invalidated for reasons of citizenship. Had the remaining signatures been officially analyzed, we can expect there would have been many more. That’s a pretty steep democratic deficit.

Post-election, we’re now in the process of strategizing internally, taking stock of what our goals are, as well as continuing to build coalitions with other migrant groups. One such coalition is with the Nicht Ohne Uns 14% campaign, which is focused on voting rights for all. Already, the Ampel coalition government on the national level [the Social Democratic Party, the Greens and the Free Democrats] has proposed an easier path to citizenship after 5 years in Germany (as well as allowance of dual citizenship). And Berlin’s incoming RGR government [the Social Democratic Party, the Greens and The Left] has announced that it would like to increase the number of naturalizations every year. This would allow for more democratic participation for many who have been historically excluded from it. But not everyone. There are also calls from The Left to push forward an initiative to change voting rights on the Berlin state level to make all those who have been a resident of the city for 5 years eligible, regardless of citizenship. There are many challenges to changing these laws, but we are definitely staying deeply engaged with this particular issue, among others!

What do you think other activists can learn from the DW & Co Enteignen campaign?

Anisia & Trevor: In addition to the importance of connecting across differences, experimentation and including the voices of politically disenfranchised residents, it’s important to have good information support systems. We had a lot of materials, workshops, seminars and discussions internally (and externally), to ensure that anyone new to the campaign knew what was going on and what they could do. They had all the necessary information and contact points to get as involved as they wanted to be.

And from the experience of working within Right to the City for All this year, another important takeaway is joy and collective care. Despite our success, this has been a challenging time to organize and stay engaged for many people. Being excited to see and work with people, some of whom you may not meet in real life for months, is a powerful motivator.

And the fact that over a million Berliners voted yes  for expropriation should be a powerful motivator for other initiatives too!

Refuge Worldwide readers can learn more about the DW & co enteignen campaign on their website.