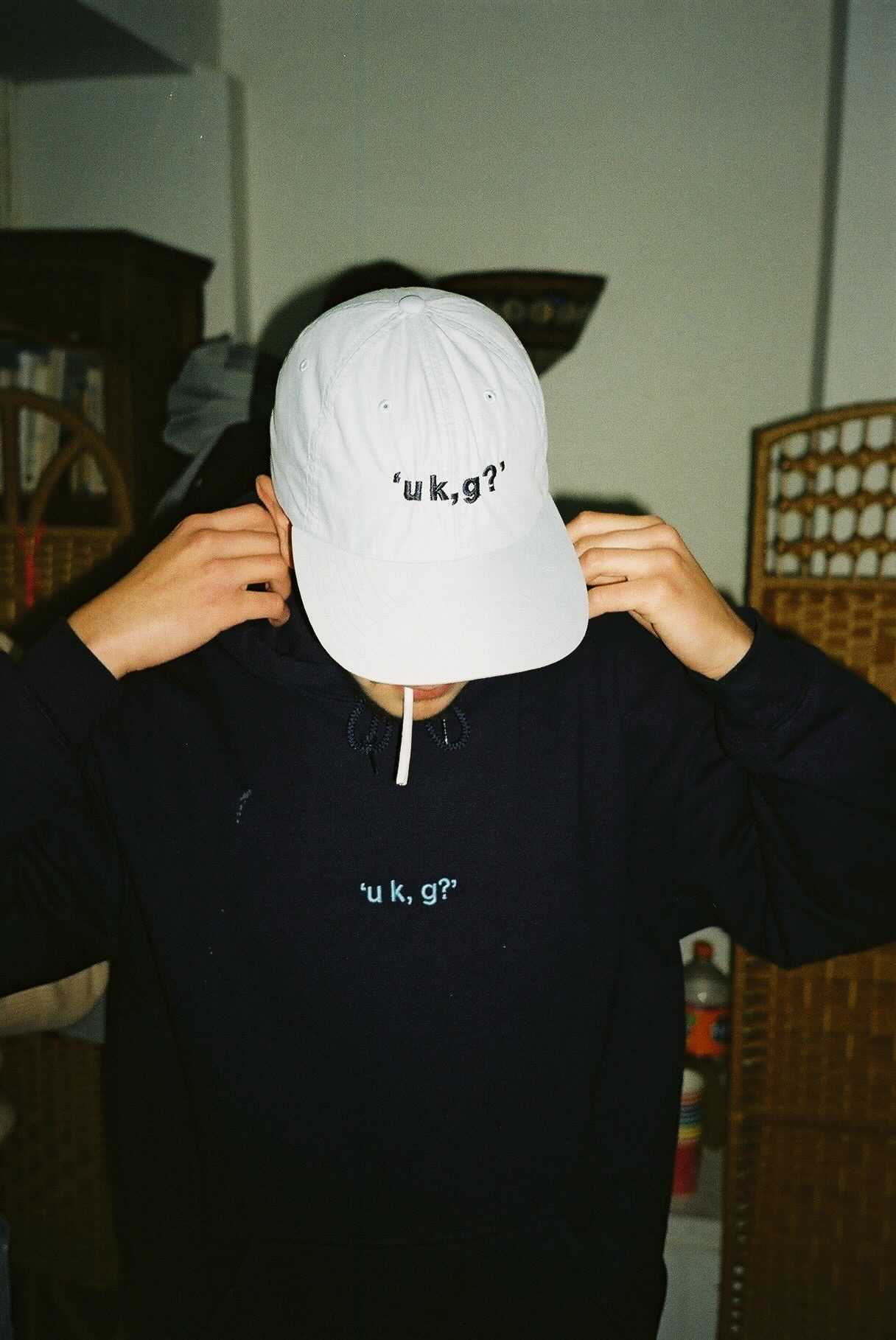 The Brighton-based collective is creating campaigns for young people to form community and seek help.

Founded in October 2019 with the aim of bridging the gap between the dance music community and mental health, eott encourages us to check in with our friends and opens up broader discussions around mental health.

1 in 6 people in the UK experience mental health problems in any given week. With 75% of these issues established by age 24, it’s abundantly clear that mental health resources are in tremendous need.

The Brighton-based collective has helped this young audience by setting a familiar yet casual tone, distributing pamphlets that offered helpful advice during the lockdown. Through their relatable branding and endorsements by big names such as Slowthai, Loyle Carner, and Bru-C, they have quickly sold out their merchandise, donating all profits to charities such as Music Minds Matter, Brighton Food Bank, and Help Musicians.

Could you briefly recount your origin story to me, and how you two banded together in bringing eott to life?

Morgan: It started maybe three years ago when the first idea came about. On the first hand, there was "uk, g," [eott's slogan] and the eureka moment of that. That was one single idea and when I shared this with Isaac, we both had the desire to make it into a full brand.

Isaac: I was so infused by it. You can’t just leave this at one thing. We need to make it fleshed out and realized. So we got going.

Morgan: I guess more genetically, it came about from our love of the rave scene. If we weren’t ukg fans it might’ve not happened. One day, I was just playing around with the letters and was like, ohh, uk, g! It was a few days later that I saw “you okay, g?”

You launched before the pandemic swept us. What were your initial goals for eott and how have they been reworked over the past 2 years?

It changed a lot. We had a load in the pipeline, we really wanted to do a load of shows and build community spaces.  A large deal of our plans were to do with space, people, and community, be it fundraising parties, live streams or workshop spaces, or even one-on-one interviews regarding mental health. Obviously that couldn’t have happened whilst the pandemic hit, which is the bad thing. But the good thing is it inspired us to reimagine other things we could do. That’s really when we started doing the pamphlets, and the words, and the messages to people, which flourished a lot because of the pandemic. So it was good and bad.

I’ve seen a lot of my friends repost your catchy slogans during lockdown hardships. In what ways have you seen "uk,g" influence younger generations?

Morgan: One of the good things that’s a little bit different from other mental health discussions that have come before is that it is a little bit tongue-in-cheek. Like the first time you hear it you’d say “Oh, that’s kinda funny,” which kind of normalizes it. And then it becomes a bit deeper. I think that helps. For me anyway, a lot of mental health information I was reading—prior to having started eott—was often quite damning. It definitely helps to have something familiar.

Isaac: From a personal point of view, because it is tongue-in-cheek like Morgan says, my mates come up to me in a jokey manner, like “You alright, g?” But that’s kind of the point and so, therefore, I’d reply “Well actually … it’s been kinda a rough one.” And vice versa, I ask it back.

Right, because another thing I was going to mention was that self-deprecating humor is so integral to UK culture. So I can see how your slogan both normalizes and makes it easier to have these conversations.

Isaac: Exactly, yeah. The jokiness and the point of it go hand in hand, normalizing that conversation and making it a thing that you don’t feel caught up about saying how you feel.

What are your personal ties to the dance music scene, and how do you see it intersecting with mental health? Have there been instances that have compelled you to create a positive dance community?

Morgan: Well Isaac used to be a promoter. That was our first step in the rave scene.

Isaac: Yeah, I used to put on parties in Brighton. I wanted to do it as a career and then it kinda lost its novelty. It got very repetitive and it became a money-making operation so I stopped that. Now I put on the occasional live music show, which is more about promoting Brighton artists. To be honest, I didn’t really like the crowds that were coming. I didn’t know or connect with any of them, which is something that moving forward when we do start doing shows for eott, it will be very much about conversing and forming a community on the dance floor.

Morgan: So maybe in that sense, Base Levels (the parties that Isaac used to run) was an idea of how we don’t want to run a party.

Isaac: It was the yang to the ying.

Morgan: And for me, how me and Isaac connected years before eott was I was a DJ (well, I still am a DJ). That was my step into the rave scene. Isaac was my first promoter. There was once a time when I desperately wanted to be a DJ/producer. Long story short, it was causing me a lot of stress. I was constantly comparing myself and winding myself up. And that was really unhealthy. But also it kinda gave me insight into the mental life of other DJs; they travel all the time on their own, making music on their own. It’s just such a sole mission, you know? I worried about that.

Collaborations with DIY groups like Krudd, Beastwang, and Keep Hush seem central to eott’s identity. How have they helped to spread awareness of your brand?

Morgan: Well, Keep Hush are the guys basically. Big love to Fred. Of the current rave scene, they are the frontrunners, brand- and community-wise. They’ve always been a massive inspiration. Large Bru-C and Nico have also been supporting since week one or two.

Isaac: They help familiarize the message. It helps to show that these people are also supporting the message. Those are the two key things. When someone sees Slowthai or Loyle Carner repping, for example, then they’re like, “Oh, it’s okay for me to…” They’re idols for many people.

Do you make a point to collaborate specifically with Brighton-based artists?

Morgan: It helps, but it’s not exclusive. It depends if we’re going to be working face-to-face or not. Luckily in the modern age, a lot of our work can be sending files back and forth. But if we’re throwing a party or bringing DJs, then it would be all local.

Isaac: We definitely want to build a hub in Brighton because that’s where we are. But the end goal is to make hubs across every city in the world. But we gotta start somewhere and Brighton is where we were born.

Now that we’re (hopefully) entering a post-lockdown era, what big plans do you have for future events, collaborations, etc.?

Morgan: We’ve got a collab fundraiser coming out with UKF, which a big inspiration for me. They’re a pretty big deal in the UK, anyway. We’ve also got a rave safety campaign coming, which I’m personally really excited to get out as it’s been in the works for ages. And we are working on a uk,g tour. We’ll start with five dates across the country—just small, low-capacity parties. 150 people max. Purely a fundraising effort. Community vibes. Other fundraisers and words too. That’s the general eott vibe.

I saw eott got funding from Pirate Studios. Congrats! Did you personally reach out to them or are organizations starting to catch wind of you and reach out?

Morgan: Well, they first shouted us over summer about collaborating on a fundraiser, and since that we’ve been closer and they told us of this fund where they give out free studio time. They gave all of us 1,000£, so we put it out for people to apply. We had 40 spaces and 350 applicants, which is really cool but we had to let loads of people down. It was really inspiring to see that many people were interested; we’ll just have to think of some other ways to get everybody involved. Because it’s pretty amazing to see that nationwide there were 350 DJs that were interested in something like eott.