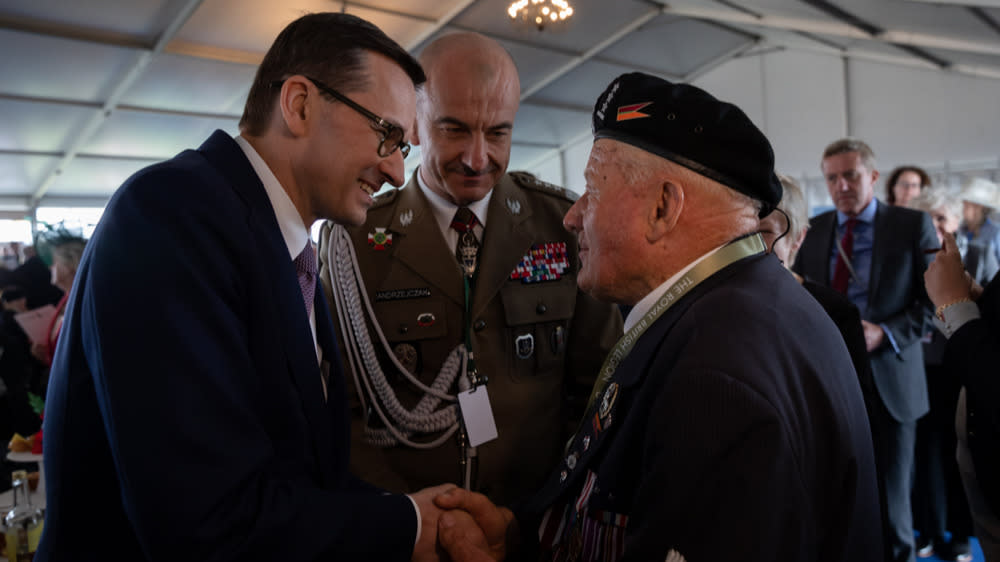 Polish Prime Minister Mateusz Morawiecki is under fire after his border forces were found to be orchestrating ongoing and vicious pushbacks along the border with Belarus.

Poland's 400km (248-mile) long frontier with Belarus forms part of the EU's eastern external border. Poland and fellow EU states Lithuania and Latvia have seen massive increases in migrants from Iraq, Afghanistan and other Middle Eastern and Asian countries since the start of the summer. Last month alone, Polish border guards detained eight times as many people crossing the border as they did in the whole of 2020.

Amnesty International found that heavy-handed patrol teams in Poland pushed back a group of over 30 asylum-seekers into neighbouring Belarus, leaving dozens of families to cross a freezing river in the darkness of night. On Wednesday, October 20, Polish divers were reported to have found the body of a 19-year-old Syrian asylum seeker in the river following the alteration with the border forces.

The death marks the 18th recorded migrant fatality since the arriving numbers began to surge in recent weeks—including just one week prior when a 24-year-old man from Syria was found dead in a field near the village of Klimowka. Poland made headlines earlier in the year when it again breached EU obligations to LGBTQ+ and women's rights, which led to the EU revoking funding to the country. The latest occurrence is the start of yet another decisive conflict between the country and other member states who are looking to take legal steps to end the dispute. Amnesty International and the Council of Europe have criticised Poland for its treatment of migrants as well as its continued abuse of marginalised communities.

In August, Eve Geddie, Director of Amnesty International’s European Institutions Office, said, “Poland has been cruelly holding this group of people on their border in horrendous conditions for weeks.”

The situation has worsened in autumn as Belarus President Alexander Lukashenko attempts to use the migrants as a form of “hybrid warfare” against the EU in retaliation to the sanction imposed on his country in 2020 after his crackdown on protesters. As the grip of winter tightens, asylum-seekers have found themselves trapped between both countries with no shelter. Many fear they are on the brink of freezing to death as conditions exacerbates.

A group of Yazidis and Kurd asylum seekers this week said "they are treating us like a game" as the standoff intensifies. They are being bartered as political tools against each Government and the EU, with neither Poland and Belarus ready to budge.

Poland's border, an entry passage to the EU, began to swell over the summer as thousands of refugees sought to enter Germany through the state of Brandenburg in a bid to arrive in Berlin. In August, 209 people were picked up at the German border. In September the number rose to 1,164. By the third week of October, the number had expanded to over 2,000. According to German border police, over 5,700 'illegal' border crossings happened in 2021, mostly by individuals from Syria or Iraq.

While refugees weren't a prominent subject matter in the recent German elections, the current scenes in Poland and the German border will bring back memories of 2015-2016, when hundreds of thousands of refugees arrived in Germany after Chancellor Angela Merkel vowed to take one million from Syria and Iraq. Only 80,000 asylum applications have been registered this year, but as the situation deepens in eastern Europe, it is thought that thousands more will make the journey despite the wintry and hostile conditions ahead of them.

To support people stuck along the Poland-Belarusian border, visit Constellation of Liberation's funding drive. The Berlin-based organisation is collecting clothing, essential items, toiletries, and fiduciary donations to be distributed to humanitarian workers and activists along the border. Visit their Instagram page or email them at co-liberation@riseup.net.