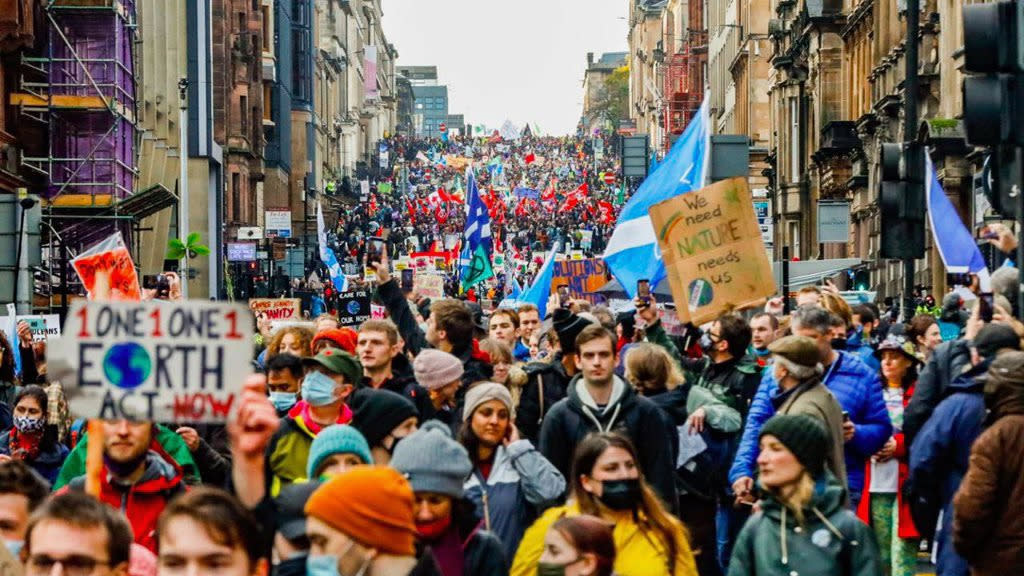 How COP26 became a greenwashing affair for the Global North

The annual climate conference, held this week, has been lambasted for excluding indigenous and frontline communities.

For the 26th edition of COP, the annual UN Climate Change Conference, world leaders and the founders of many influential companies have paraded empty pledges to combat climate change in Glasgow, Scotland.

Swedish climate activist Greta Thunberg slammed COP26, which started on October 31 and will end on November 12, as a "Global North greenwashing festival" that falls short of any real action. Her sentiment was echoed by activists around the world, who gathered a counter climate summit on the streets of Glasgow this week to amplify the communities, ideas, and solutions that have largely been absent from the big business-driven initiative.

Days before the conference, British Chancellor Rishi Sunak announced that the Conservative Party would be cutting air passenger tax for flights within the United Kingdom. The decision will make flying a substantially cheaper method of transport in comparison to rail despite its greater ecological imprint. The decision is a testament to the host nation's attitude towards climate change and how seriously it intends to curb emissions. The hypocrisy around the event became even more evident when it was speculated that 400 private jets would be transporting world leaders and billionaires in and out of Glasgow.

With Covid-19 travel restrictions still in place in the UK, the event also became the whitest and most economically privileged on record. Thousands of frontline campaigners and organizers from the Global South were excluded from the event; the COP26 Coalition said that two-thirds of those hoping to travel to Glasgow had given up as they were overwhelmed by the visa process and accreditation problems. This group includes indigenous movements, vulnerable communities, trade unionists, and youth strikers. Many had their permits revoked because they didn't have access to vaccines or were priced out of scarce accommodations.

What was labeled a make-or-break climate summit fell spectacularly short of having any real substance or objectivity. Ahead of the event, climate scientists warned that if nations fail to pivot away from fossil fuels and globalized supply chains, the planet will inevitably face catastrophic consequences. While some nations have instituted new plans to cut emissions, there is growing collective concern that these numbers are nothing but virtue signaling on the world stage.

Last year, the Lancet’s Planetary Health journal concluded that the Global North bears 92% of the world's responsibility for climate breakdown created by unsafe emissions, while the south is responsible for 8%. In recent years, industrialized nations have presented tailored emission goals that often result in little to no economic impact while insisting that poorer states should take the brunt of the burden to save the planet. Many industrialized countries are also better equipped to weather the economic backlash of adjusting to climate change, turning to substantially more expensive alternatives like wind energy, while the Global South has had to rely more heavily on fossil fuels. This questionable top-down approach to climate change led to debates about how emissions should be calculated at this year's COP.

As we enter the most "consequential decade in humanity’s history,” South African social-environmental activist Kumi Naidoo said at the third day of the summit, “what we do in the next ten years will determine what kind of future we have—and whether we have a future at all. We still have a window of opportunity, but, if we’re brutally honest, that window of opportunity is small, and it is fast closing.” For there to have been even a glimmer of hope, nations would have had to veer from political PR and commit to inclusive pledges that integrate expertise on equitable and transformative non-market solutions to the climate emergency—and come into effect in months. So what will the world look like after COP26? Probably no different.