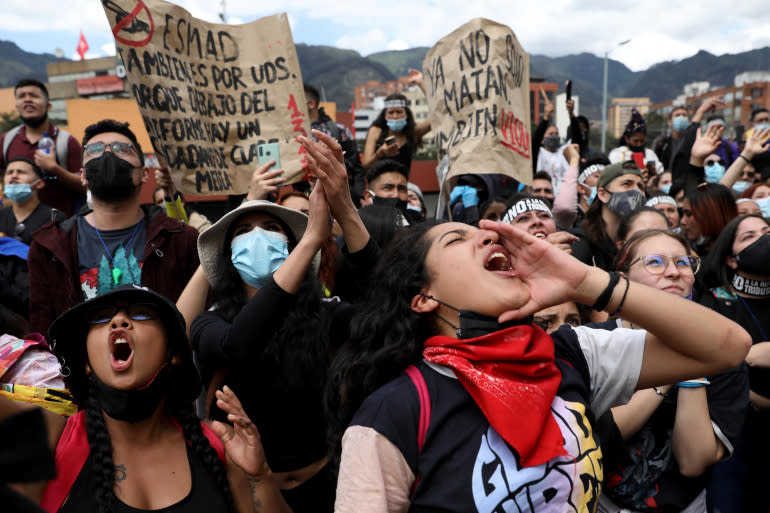 Dozens of people have died in the surge of demonstrations that started on April 28.

The bid would have added a 19-percent tax to a number of essential goods and services, including water, electricity, and food items. Officials put forward a similar motion giving tax breaks to corporations and the banking sector in 2019.

Despite Duque’s withdrawal of the recent legislation, the public’s resistance has mounted into a general strike. Demonstrators are calling for sweeping social changes and demanding a basic income scheme, free university education, and police reform. Dozens of people have died in the subsequent uprisings, almost all of them civilians.

Many of the protesters' demands are rooted in Colombia's high levels of inequality. The coronavirus pandemic has made the lives of many Colombians more precarious as strict lockdowns without financial support left many people unable to earn a living. Official numbers now say that 42.5 percent of the population is living in poverty. The country’s GDP dropped by 6.8 percent last year.

While the initial wave of protests were sparked by trade unions, they have since grown to involve a number of heterogeneous groups including students, feminists, Indigenous rights groups, and middle class people who fear the government’s policies will push their incomes below the poverty line. Government officials have attempted to link the protests to left-wing rebel groups such as the revolutionary armed forces FARC, with whom the government signed a peace treaty in 2016.

Protestors argue that the government's security forces have been violent and treated the population as “the enemy.” “You can feel change when you go out in the street and feel the union of the people for wanting a better outcome for our country, but it all ends when we see someone else’s life end before our eyes in some other part of Colombia or in Bogotá," the Bogotá-based club promoter Miguel Lega told Refuge Worldwide. "We really need some change. It’s not normal to see more than 800 people lost and more than 30 people dead by our ‘authority.’ If we weren't killed by COVID-19, the government would be the one to kill us.”

President Duque has ruled out giving into the protestors' demand to dismantle the militarized riot police, which has exercised increasingly brutal tactics. On 4 May, the United Nations’ human rights office accused Colombia's security forces of using excessive force and said it was "deeply alarmed" by reports that police had opened fire on protesters.

Demonstrators have asked the international community to share information about the strike using the hashtag #SOSColombia and to organize solidarity rallies across the globe. For other ways to help citizens on the front lines, visit Primera Linea Colombia's Instagram page.