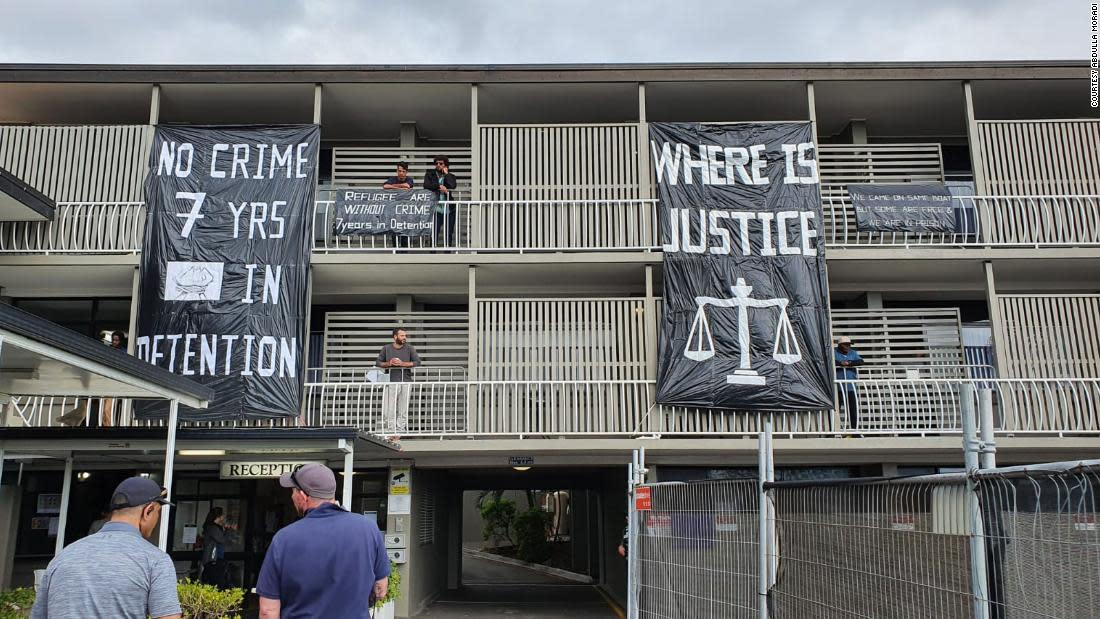 We interviewed Mehdi Ali, an Iranian asylum seeker being detained in the country's cruel detention system.

Novak Djokovic's detention in an Australian immigration facility helped expose inhumane conditions that many refugees and asylum seekers have been withstanding for years.

A Void for Populist Tactics

Until a judge ordered his release, Djokovic, whose vaccination and visa status have been under question in mid-January, found himself in an uncertain limbo with 32 other detainees in a hotel only miles away from the Australian Open. At first, it was a refreshing story to see one of the world's most famous athletes experiencing the same legislative treatment as everyone else. But within hours, news broke from Djokovic's family about the conditions he was being housed in. His father said "he's not in detention, he's in prison." His mother went on to describe the situation as a "political witch hunt" and "corona fascism" against her son.

The tennis star lasted a handful of days under the toll of Australia's processing system before being released by a judge to partake in one of the most premium sporting events of the year, although his visa was again revoked ahead of the tournament. While the situation was developing into a global news story, the cameras began to shine the light on the other detainees who have been held in indefinite detention for up to nine years.

The birthplace of Rupert Murdoch and his media empire, Australia has long been a country where elections are won on a 'tough on borders' rhetoric. Over generations, this has created a void for politicians to pursue populist tactics that form the perfect environment for abusive migration policies to thrive. Following the Arab Spring, the Australian government began to forcibly transfer asylum seekers and refugees to offshore camps in Papua New Guinea and Nauru in 2013.

It is estimated that up to 3,000 refugees and asylum seekers have experienced medical neglect, abuse, and inhumane treatment while detained in these offshore detention centers. Under the guise of border control, an atrocious processing system makes conditions so doubtful and difficult for fleeing migrants that many choose to return to their homeland or seek refuge somewhere else.

The average length of stay in Australia's immigration detention currently stands at 689 days. In the US, the average processing period is 55 days, and in Canada, it's 14 days. The disparity between the length of stays in different countries has led experts to scrutinize the extreme physical and mental harm these conditions put on people. Inordinately long waiting times, like those in Australia, create deliberately hostile systems that sunders the hopes of those most in need.

The Case of Mehdi Ali

It is rumoured that twelve people have died in Australia’s offshore detention system. The cause of death ranges from suicide to medical neglect and murder. One of the most known deaths is that of Iranian refugee Omid Masoumali, who set himself on fire during a United Nations visit in protest against his indefinite detention. Another notable incident was the death of another Iranian refugee who was refused medical treatment. Hamid Kehazaei passed away after a minor injection in his leg became septic and his life was drastically cut short after he failed to receive the treatment that was requested. Countless others have suffered while in detention in both Australia and its offshore centers.

Among the other detainees in the same Park Hotel—a neglected makeshift facility with no fresh air—are countless migrants who are stuck in their rooms for almost every minute of the day. Iranian asylum seeker Mehdi Ali has endured nine years of wait in detention since he arrived in 2013, he told Refuge Worldwide in an exclusive interview. His room was the floor above Djokovic's in the hotel, which is known locally as a "coffin" and a "cruel" impromptu solution for those awaiting their status. As early as October 2020, it was nicknamed the 'Outbreak Hotel' after COVID-19 swept through the facility.

Ali's plight has become a sadly symbolic and familiar affair to those navigating Australia's cruel immigration policy. Those confined inside feel forgotten and abandoned, but their stories were rarely told until the cameras and crowds gathered in the streets outside the hotel to cover Djokovic's case. Ali left Iran as a persecuted member of the Ahwazi Arab minority at the age of 15 years old. His family convinced him to seek refuge and arranged transport to Australia in hope that he might find freedom in another part of the world. Ali's claim for protection was legally obliged under Australian law, but the fight for refugee status has hit many rocks. To date, he has been detained in Nauru, Brisbane, and now the Park Hotel.

During his nine years, he has seen both sides of the coin. Ali has witnessed those arriving by boat being swiftly processed while in detention and being granted refugee status relatively quickly. But he has also been an onlooker to death and despair, and has been beaten and abused while in the system.

In the Park Hotel rooms, Ali says, the windows are sealed from the world and fresh air. The floors are patrolled by guards who monitor the hotel every day. To get a gasp of fresh air, Ali and other detainees leave their rooms to smoke. “I have to come up with the best method for surviving," he explains. "Sometimes, I feel like if I communicate with other people in the same situation, their frustrations could affect my mental health.”

Ali receives no updates. Instead, every day feels the same, and there's "no guarantee it is going to happen at all.” He has seen countless friends and other refugees give up all hope and walk out of the detention centers bound for a flight to another land. Australia's inhumane approach to handling these people's civil liberties, especially in offshore locations, resulted in New Zealand offering to resettle these refugees so they could finally be free of their ordeals. But Australia refused this proposal as they argued it would act as a "pull factor" and incentive to others thinking of coming to Australia by boat.

As Djokovic recently discovered, Australia has a mandatory detention policy for those arriving without a visa or appropriate documents. Consecutive governments have tried to deter refugees and those arriving by boat by housing them in offshore facilities. While Nauru remains open, another offshore site on Manus Island was forced to shut in 2016 after being deemed illegal and substandard.

The closure resulted in more widespread condemnation of the facilities as the reality of the conditions inside became a mainstream news story. In response to growing concern in 2019, the government began allowing critically ill refugees to be "temporarily transferred" to the mainland for medical treatment. But even for those within Australia, their treatment as a whole remained inhumane.

The Djokovic developments have sparked new conversations around how Australia handles refugees and asylum seekers. The exposure that came with the international press raised serious questions about how this cruel procedure has been allowed to happen under the radar for so long. It has also provided a podium to those who have had to weather the vicious conditions of seeking refuge in some of the world’s wealthiest democracies.

Similarly inhumane conditions for asylum seekers abound in other powerful nations. Last year, Denmark authorized the transfer of asylum seekers to offshore facilities, while in the UK, the House of Commons passed the Borders Bill, purporting to do the same. This is currently being examined by the House of Lords, but if these laws pass, they will include the worst aspects of Australia’s policy. The Djokovic dilemma has exposed Australia's cruel policies to the world, while also revealing that this model has grown into a source of inspiration for nations in Europe and further afield.